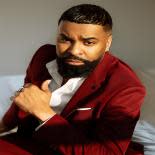 An Evening with Ginuwine and Friends

*This event was previously scheduled for February 20 and has now been rescheduled to November 12, 2022. Previous tickets will be valid for the new date. Please email pac.info@raleighnc.gov with any questions.

Ginuwine: After spending much of 2013 focusing on his R&B supergroup TGT -- which also features Tyrese and Tank -- Ginuwine shifted his attention to his solo work with the planned 2014 release of a new album titled Old School Young -- his first solo recording since 2011's Elgin. His successful stint with TGT included the release of an album titled Three Kings, which hit No. 3 on The Billboard 200 chart, and a tour that had fans snapping  up tickets for concerts in major performing arts centers.

Ginuwine, born Elgin Baylor Lumpkin, is a native of Washington, D.C. who grew up listening to the music of Michael Jackson and Prince, which inspired him to begin performing. After he was discovered by the R&B group Jodici in 1996, he was signed by Epic Records and released his debut album, titled Ginuwine... The Bachelor. It spawned the hit single "Pony," which is a good example of his influential brand of hip-hop soul. Among the other hits in Ginuwine's catalog, which inspired young stars like Ne-Yo and Chris Brown, are "Differences," "In Those Jeans," and "So Anxious."