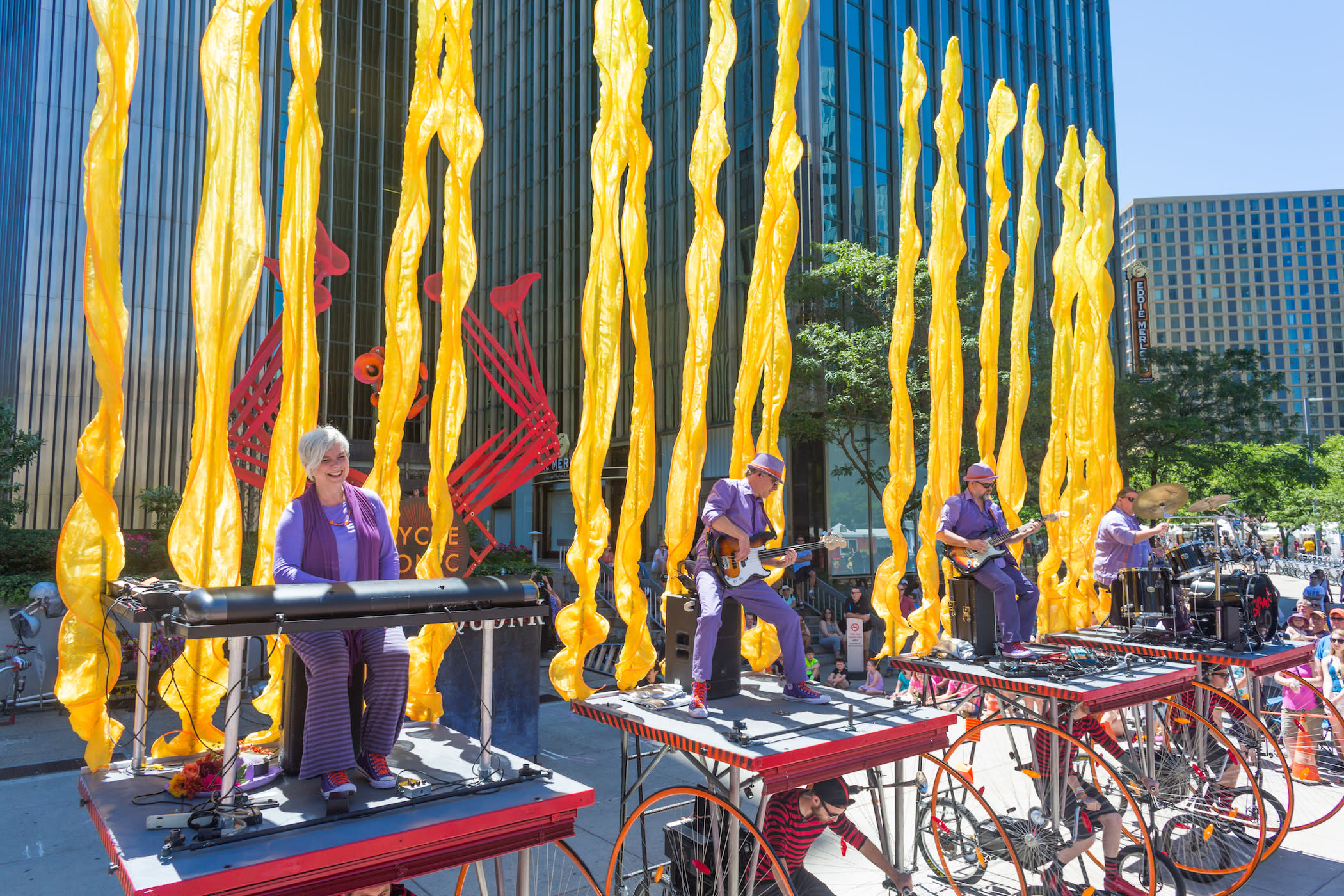 Join the 41st Annual Artsplosure - The Raleigh Arts Festival! Follow the sounds and sights of Artsplosure to its home on Fayetteville St.

This family-friendly arts festival has been described by The News & Observer as “how the Triangle celebrates Spring.” Metro Magazine has recognized Artsplosure on numerous occasions as the “Triangle to the Coast’s Best Cultural Event,” and Artsplosure was singled out for its high quality and popularity in the New York Times’ “Escapes” section in April 2007.

For the third consecutive year, the festival’s full footprint will be entirely on Fayetteville Street with a fully programmed music stage anchoring the northern end of the event.

On the southern end, City Plaza will feature Australian environmental artist Amanda Parer’s large scale scultptural work entitled What’s That? from her Fantastic Planet series.  The work will be enlivened by an adjacent performance space.

The festival’s centerpiece, the juried and highly competitve Art Market features nearly 180 visual artists from across North Carolina and the nation. These artists and crafters exhibit and sell their original works of art in the following categories: ceramics, fiber art, glass, jewelry, metal, painting, photography, wood, other 2D and 3D works. Three expert judges award $3,500 in six merit awards to the top artists in the market. The Art Market opens an hour early on Sun., May 19 for easy access for those with accessibility or other special needs.

Fayetteville Street will be filled with music beginning Sat. at noon, on the Main Stage near the NC State Capitol building.  Saturday performances highlight an array of talent and genres, featuring sets from the India Ramey, Rissi Palmer, Union Duke, and Scott Mulvahill.  Saturday’s headliners are the Gulf Coast Soul band, The Suffers, whose appearances on The Daily Show, NPR, and at SXSW have them at the top of many Musicians-to-Watch lists.  Great music continue on Sun., May 19, starting at 11am with DZ Carr Band, The Old Ceremony, The Artisnals, and The East Pointers.  Sunday’s headliner is a founding father of the genre now called Americana, Alejandro Escovedo.  From his early Punk days opening for The Sex Pistols and collaborating with Raleigh’s Whiskeytown and Ryan Adams, Escovedo is considered one of the finest singer songwriters of his generation.

Kidsplosure opens on W. Martin Street at 11am on Sat., with special performances by the Enloe Jazz Assassians, One Tribe Drummung, Tarin Pipkins, Express Yourself Kids, Theatre Raleigh, Story Time with Read With Me, NC Association of Black Storytellers, and an array of local young talents from across the Triangle.  As always, Kidsplosure will be filled with crafts and other interactive activities for children to enjoy and learn from!