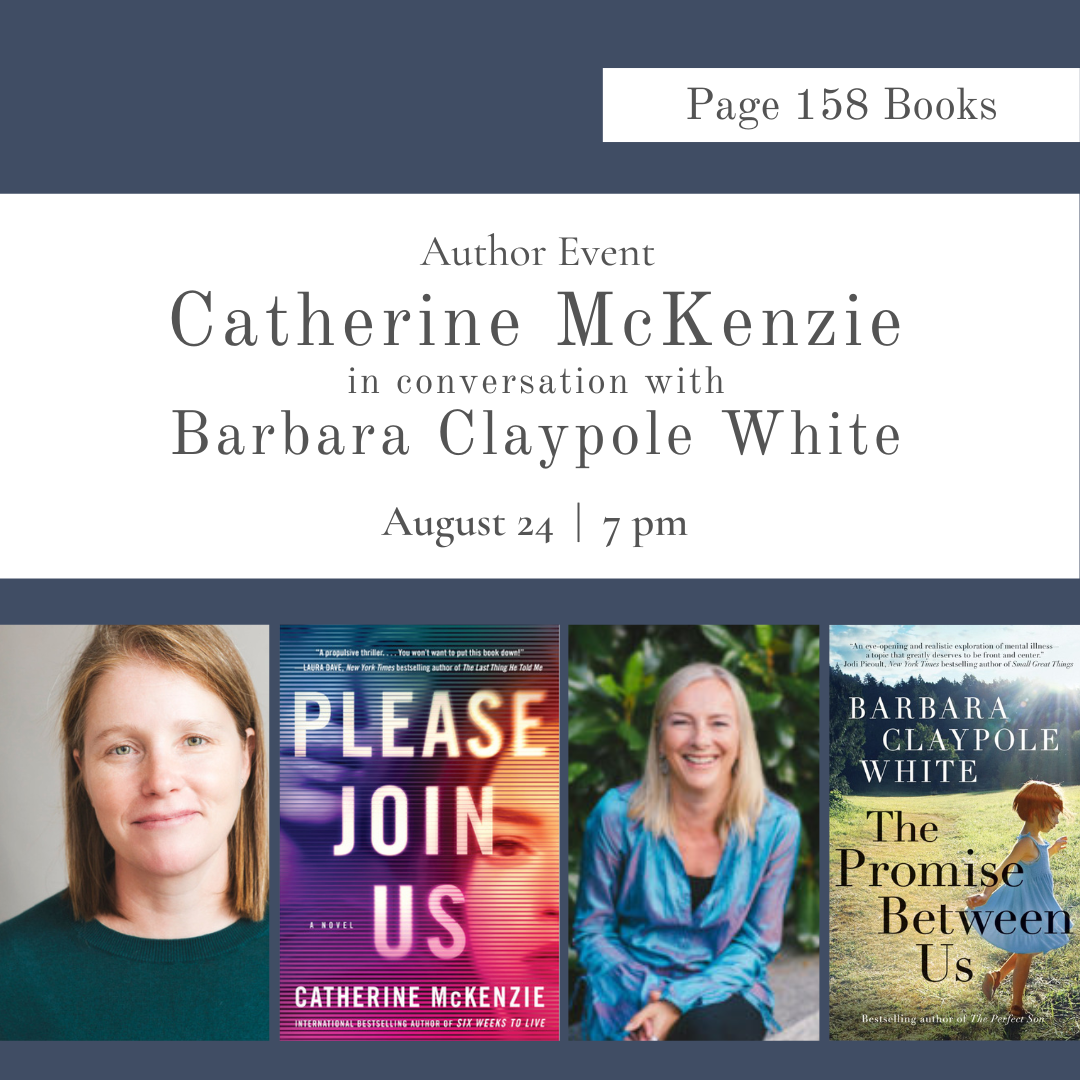 Page 158 Books is pleased to present authors Catherine McKenzie and Barbara Claypole White in conversation about McKenzie’s book PLEASE JOIN US, out Aug. 23.

When USA Today bestselling author and high powered attorney Catherine McKenzie decided to retire from her more than two decades practicing law to write full time, she knew that the first book she’d write post-retirement would be drawn from an unusual invitation she received years earlier to join a secret women’s collective. A clandestine organization, she had no clue who recommended her or how they got her information, but she was intrigued. While she didn’t end up joining, the idea stuck with her as the concept—a group of successful women supporting each other—was something she could’ve used in her more than twenty years in the trenches of the boys’ club that is the legal profession.

In her thirteenth novel, PLEASE JOIN US, Catherine McKenzie “delivers the thriller goods” (Publishers Weekly) with a timely and gripping exploration of what happens when a secret network of women fed up with the boys’ club band together to fight the patriarchy, stopping at nothing to achieve success.

It all starts with an email: Please Join Us…Timed perfectly to thirty-nine year old Nicole Mueller’s mid-life crisis as her once brilliant law career is falling apart and her personal life is on the rocks. The invitation is from an exclusive women’s networking group, Panthera Leo, where members are organized in to “Prides” of five. Membership is anonymous, but every member is a successful professional. Nicole’s husband, Dan, has reservations as it seems a bit cultish to him, but Nicole is all in and signs up for their upcoming retreat. Once there, she meets the other women who will make up her Pride: a CEO, an actress, a finance whiz, a congresswoman. The founders of Panthera Leo are equally impressive. They explain the group’s core philosophy: they are a girls’ club in a boys’ club world.

At first, all Nicole sees are the benefits, including amazing new clients and a great apartment. The favors she’s asked for in return seem benign. That is until she’s called to a fellow Leo’s apartment late at night and discovers a dead body. The expectation is that she, as a member of the Pride, will help cover up the crime—no questions asked. Breaking the glass ceiling requires breaking some rules after all, doesn’t it? Now, the red flags she ignored early on and the nagging feeling that perhaps this was too good to be true are all too relevant. But is it too late to get out?

Whisper Network meets A Special Place for Women in this “brilliant, tangled web of lies, cover ups, and deception” (New York Times bestselling author Mary Kubica) about women, power, revenge, and sisterhood. We look forward to discussing prominent plans for coverage of PLEASE JOIN US with you soon.

Catherine McKenzie was born and raised in Montreal, Canada. A graduate of McGill in History and Law, Catherine practiced law for twenty years before leaving the practice to write full time. An avid runner, skier and tennis player, she’s the author of numerous bestsellers including HIDDEN, FRACTURED, THE GOOD LIAR and I’LL NEVER TELL. Her works have been translated into multiple languages and THE GOOD LIAR, YOU CAN’T CATCH ME and I’LL NEVER TELL have all been optioned for development into television series.

Barbara Claypole White, a Brit living in North Carolina, is a bestselling author, an OCD advocate, and a woodland gardener at war with the local squirrel population. (She's not too keen on voles, either.) The Unfinished Garden won the 2013 Golden Quill for Best First Book; The In-Between Hour was chosen by the Southern Independent Booksellers as a Winter 2014 Okra Pick; The Perfect Son was a Goodreads Choice Awards Nominee for Best Fiction 2015; Echoes of Family was a finalist for the WFWA 2017 Star Award; and The Promise Between Us, which shines a light on postpartum OCD.

About THE PROMISE BETWEEN US: Metal artist Katie Mack is living a lie. Nine years ago she ran away from her family in Raleigh, North Carolina, consumed by the irrational fear that she would harm Maisie, her newborn daughter. Over time she's come to grips with the mental illness that nearly destroyed her, and now funnels her pain into her art. Despite longing for Maisie, Katie honors an agreement with the husband she left behind--to change her name and never return.