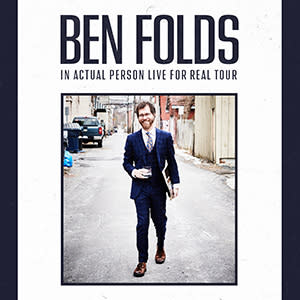 Ben Folds is performing live at Memorial Auditorium, November 6! Set to appear LIVE on US stages for the first time since the pandemic hit, Ben Folds has announced a series of concerts that include solo piano and orchestral performances he’s dubbed his “In Actual Person Live For Real Tour.”

Folds has been in isolation in Australia since February 2020, where he was on tour when COVID-19 shut down international travel and touring.  While in Australia, he has continued working, launching a podcast series called Lightning Bugs: Conversations with Ben Folds, performing live stream concerts and online chats via his Patreon page, composing new music, and preparing for the launch of a new TV series.