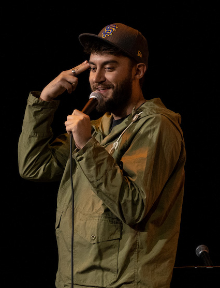 Casey Frey is a dancer and comedian notable for his videos on social media, particularly Vine.

Frey grew up in Mendocino County, California, where he has stated he made videos with his brother for family and friends growing up before turning to Vine, where he initially made videos of himself dancing. Frey had over 250,000 followers on Vine before the app's shutdown in January 2017. In May 2019, a video set to the song "GOMF" by Dvbbs in which Frey as "a version of himself wearing sunglasses mocks for chopping wood and dancing, a third Frey donning an open button-up and a bucket hat takes notice and intervenes" went viral. The video inspired numerous subsequent remakes and parodies on TikTok in 2020.