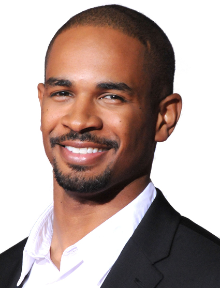 Damon Wayans Jr. is an American actor, comedian, and writer. Damon is widely known for his character 'Coach' on "New Girl" and as the character of 'Brad Williams' in ABC's "Happy Endings," for which he was nominated for the Critics' Choice Award for Best Supporting Actor. In 2014, he starred in the comedy film "Let's Be Cops," and provided the voice of Wasabi in "Big Hero 6," which won an Oscar for Best Animated Feature Film of the Year.

Damon made his film debut when he was cast in his father's feature film "Blankman," playing 'Young Kevin.' He later appeared on his father's sitcom "My Wife and Kids" as 'John,' one of Junior's friends. He also worked as a staff writer on the series. In fact, the character of Junior was loosely based on Damon himself. He appeared in and served as a writer on "The Underground" as well. Damon also surprised audiences when he garnered a standing ovation during his debut appearance on Def Comedy Jam. He starred in the Wayans family comedy "Dance Flick" as the film's main character, 'Thomas.' Damon has been on tour selling out all over the country in theatres and casinos.