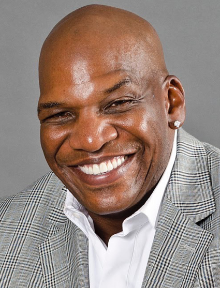 Known for Uncle Elroy in "Next Friday" & "Friday After Next," Don "DC" Curry is a certified comedy heavyweight. A master of comedic timing and delivery, Curry continues to be versatile and relevant since winning two “Comedian Of The Year" awards in '95. He can be found cracking jokes in movies, TV appearances, and through his numerous comedy specials and tours.