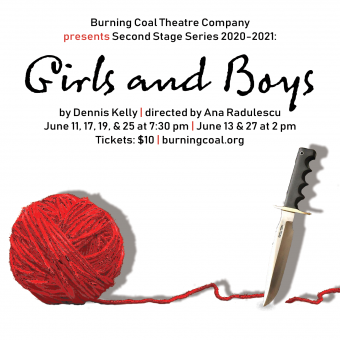 Girls and Boys by Dennis Kelly premiered at London’s Royal Court Theatre in February 2018 and transferred later that year to the Minetta Lane Theatre in New York, starring Carey Mulligan (Promising Young Woman, The Dig).  It tells the harrowing tale of a young upwardly mobile woman who is a business woman, a wife, a mother of two young children.  In short, she has it all.  But can she keep it?  Based loosely on Euripides’ Medea, this tour de force one-woman show was called “phenomenal ” and “gripping” when it premiered.

NOTE:  30 tickets will be available for each live performance.  We will also sell livestreaming tickets for each date’s performance.