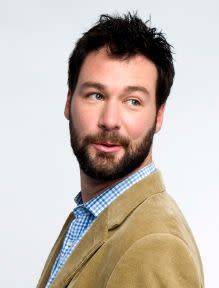 Named one of "10 comics to watch" by Variety, Ottawa-born comedian, host and actor Jon Dore is renowned for his offbeat humor and unique bait-and-switch style. TV Guide called Dore one of the "rising stars of the future" and NOW Magazine named him Best Male Stand-up. He was the star of his own show, "The Jon Dore Television Show" on IFC and is the host of HBO Canada's "Funny As Hell".