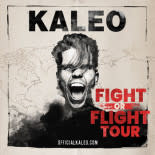 Frontman and songwriter JJ Julius Son has been in the studio allowing a combination of globe-trotting and meticulous tinkering to influence the highly-anticipated follow-up to the Gold-certified A/B, resulting in spectrum of sounds recorded around the world – in North America, South America and across Europe. Refreshingly free of calculation, with Julius Son allowing each tune to dictate its path while simultaneously leaning-in to his blues, folk and rock inclinations.