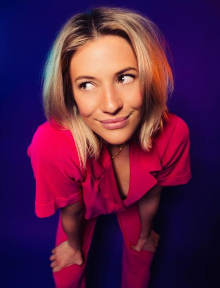 Katherine Blanford has brought her human Golden Retriever presence to stages across the country.She has taken the stage with the likes of Jeff Foxworthy, David Spade, and Ron White. She shares true confessions of a washed up Pediatric Waste Management Specialist (a nanny) and war stories from the front lines of brunch. Her humor has brought her to festivals across the nation including Limestone Comedy Festival, Laughing Skull Comedy Festival, 10,000 Laughs, Burning Bridges Festival, and Red Clay Festival. Her debut album, "Salt Daddy," released in June 2022 and hit #1 on iTunes Comedy Charts.

You can catch her co-hosting her podcast, "Cheaties," weekly with fellow ATL comedian, Lace Larrabee. The juicy series follows the two comedians interviewing guests about their personal stories of cheating and being cheated on and helping each other heal through laughter. "Cheaties" has been consecutively ranked in Podcast Magazine’s Hot 50 and continues to climb the charts.