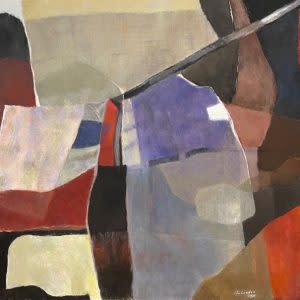 Gallery C is pleased to present a collection of works by Edith London (1904-1977), one of North Carolina’s premiere artists of the 20th century. The exhibition consists of her oil paintings on canvas, watercolors, and her torn paper collages from the 1930’s through the 1970’s. London’s work has been collected by the North Carolina Museum of Art, the Cameron Museum, and the National Museum of Women in the Arts, Washington, DC.

London’s abstract paintings are known for their interplay of transparent colors and their exemplary chromatic equilibrium. The collage works are imaginatively composed and possess the ability to communicate pictorial associations and deep emotion. Edith London, who was originally from Berlin, fled to Paris with her physicist husband Fritz London in 1933. The couple made Durham, NC their permanent home in 1939. Edith London taught art at Duke University from 1955-1969.