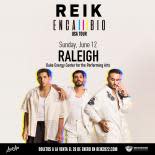 The group was founded in 2005 in Mexicali, Baja California by band members Jesús Navarro, Julio Ramírez y Bibi Marín. Their ability to merge pop music with romantic ballads has taken them to the top of the charts and has won them various awards like Latin Grammys and Billboard® awards.