A “Stay-at-Home” order is in effect in Raleigh/Wake County. For information and helpful resources, visit our COVID-19 response portal. Read More

Hoops And Hops FanFest Scheduled Prior to NCAA Sessions

(RALEIGH, NC) - Representatives from the 2014 NCAA Men's Basketball Local Organizing Committee in Raleigh today announced plans for "Hoops and Hops FanFest," scheduled to take place at PNC Arena March 21 and 23. Hoops and Hops FanFest will open 2.5 hours prior to each session and between sessions on Friday, during the second- and third round games of the 2014 NCAA® Division I Men's Basketball Championship.

Hoops and Hops FanFest at PNC Arena will include the following:

"We are thrilled to be a host venue for the 2014 NCAA® Division I Men's Basketball Championship second- and third round games," said Larry Perkins, Assistant General Manager of PNC Arena. "In addition, we are excited to offer the Hoops and Hops FanFest. The tailgating atmosphere will bring local and out-of-town fans together for pre-session activities." 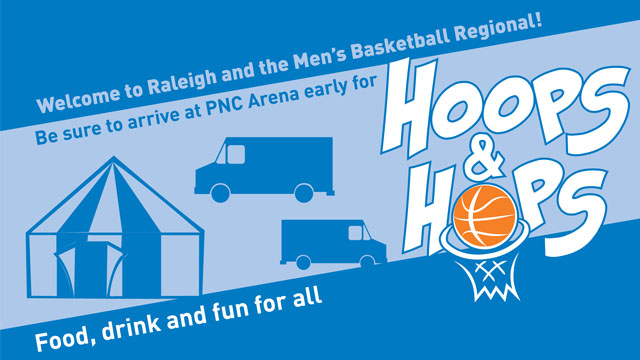 Schedule for the 2014 NCAA® Division I Men's Basketball Championship Second and Third Rounds at PNC Arena is noted below. Game times are approximate, based on the completion of the previous game.

- Hoops and Hops reopens at the conclusion of the 2nd game and will close at 6:40 p.m.

- Hoops and Hops opens 2.5 hours before tip-off, exact time is to be determined.

Opponents are determined by Session 1 and 2 winners. Games times are to be determined.

All-session and single-session tickets are available and can be purchased at www.ncaa.com/mbbtickets. Each guest, regardless of age, must have a ticket to enter the venue. For more information, please contact the NC State Ticket Office (919) 865-1510 or email ticketoffice@ncsu.edu.

For more information on the NCAA and its championship games, please visit www.ncaa.com.